Disclosure: This post may contain affiliate links, meaning I get a commission if you decide to purchase through my links, at no cost to you. As an Amazon Associate, I earn from qualifying purchases. Read the full disclosure here.

These fun drama games and activity ideas are sure to bring hours of fun and laughter to the drama team or department. These games can be used as warm-ups, team building games,  or just activities to have fun.

Sit in a circle. One person starts a sound. The next person picks it up and it travels around the circle so it becomes a ribbon of sound. Each person should pick it up and pass it on as quickly as possible. Transform it into another sound-with the person next to the one who started the first sound.

Choose partners. Sit back to back on the floor, legs straight out in front. Interlock arms. Try to stand up together as a unit by pushing against each others’ backs.

3. LED BY THE NOSE: DRAMA GAME

Children imagine that strings are attached to various parts of their bodies.
They move about the room led by that part. Example: right thumb, nose, knees. Eyelashes etc.

1. Form a circle. Each person chooses one other person in the circle to secretly watch.
2. Everyone closes their eyes and strikes a pose.
3. On “GO” — everyone opens their eyes and begins to copy the person they chose to watch. (In posture, pose, stance, etc.)
Watch as the whole team morphs into the same pose!

This exercise demonstrate to children how important it is to project their voices.

Place three bean bags in front of a row of children. One about 10 feet away from them – the second about 20 feet away, the third about 35-40 feet away (this can obviously be changed to suit the physical environment of the class).

1. Ask each child to look directly at the first bean bag, say their name and the name of their favorite animal.
2. Instruct them to say the exact same things to the second bean bag.
3. Would they speak with the same volume? Of course not – the “person” is further away.
4. When asked to address the third bean bag, they obviously should be projecting their voices as loud as they can.
5. After the entire group has addressed the bean bags, let them know they were really acting in a play just then – reaching the first three rows, the middle rows, and the back rows of the theater

Good for Day Camp, in stages for an event …and those full days of programming

Props: spotlights; a backdrop; if possible, a raised platform/ stage or catwalk; music and sound system…

#1 IDEA
First session: Putting on a fashion show can be fun for all players, especially if everyone gets to choose the role they will play. In the planning stages, have participants decide on a theme for the show (such as fall fashions or holiday outfits); plan music and which roles children will play. Both male and female models would be nice; you’ll also need designers, emcees, a journalist or two, and photographer.

Help the players plan the set up; where youth will enter and exit—as well as where the audience will sit. Make a list of special clothing to wear during the show and any other props you may need. If you have the “#3-WACKY” version below—you’ll also have to make the outfits…

Second session: Give members time to set up the show and get organized. Get the audience seated a let the show begin!
_____________________
IDEA #2: Rehearse a show in which EVERYTHING GOES WRONG! (On purpose) It’s fun but not easy to do. Example: The emcee trips over the microphone cord, or models wear things that don’t fit—and don’t go together. Think of all the silliness you can!
______________________
IDEA #3: One activity that I facilitated while managing a summer camp was to have a “WACKY HAIR-DO AND FASHION SHOW”. The staff and kids “in fantasy fashion” back-combed, jelled and styled each others hair—while others designed, drew, cut-out and taped outfits using ROLL-PAPER. They also used paints/ markers, tape and accessories! Of course, there was also the fantasy make-up. It was great fun!!! (Barb Shelby)

7. READ AN EASY STORY THAT CAN BE DRAMATIZED.

Choose children to participate and have them recreate the story. They can make up the lines or you can reread or tell it as they act it out.
A variation is to divide the students into small groups. Have each group pick a story and provide time for them to read it, choose parts and practice acting it out. Then have each group perform their story for the rest of the class and/or for children in younger grades.

You may not at first see this as a drama game–but it is! (Pretending you are something/someone else using art!) 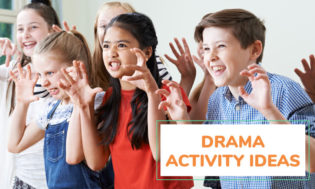 RELAXATION-STIMULATION
Ask children to relax and explore their five senses by PRETENDING to:

Blindfold children and have them use their senses to identify objects.

This activity is about making other people’s mouths water.

Have each player in turn describe a food that they cannot stand to eat. Encourage as much detail as possible so that the other group members are disgusted by the food, too.

13. BOTTLE OF WHAT (Young children)

Before the meeting, gather several empty plastic bottles with caps. Fill each bottle with a different material-such as dried peas, pebbles, marbles, sand, and birdseed. Put the caps back on and cover the bottles with construction paper so the materials inside are hidden. Ask group members to listen to the sound each bottle makes and guess what is inside it.

• Carry on a “conversation” with another person using only that person’s name. See the range of meaning you can communicate through voice inflection, facial expression and gestures.

• Build a drama Theme around a book.

• Masks: Make or purchase; wear in a skit, scene or play.

• Perform a one act scene from: Section of chapter book, a well known story book, poems such as those by Shel Silverstein and Bruce Lansky; other club members become audience for rehearsals.

• Pantomime/Acting out a song— such as the Song Sisters’ Alligator song.

• Group Improv: Give a simple idea to act out…Setting up a camp in the woods.

• Form two lines facing each other. The first two people in each line begin a conversation. At any point, the person next to a speaker- can tap him/her on the shoulder. That speaker then goes to the end of the line and the conversation continues between the new speakers at exactly the point it was interrupted.

• Choose a person to leave the room. The rest of the group stands in a circle. Choose a leader who begins and changes all movements. Everyone else should be aware of the leader but not look directly at him. Change movements when the leader does. Once everyone has the idea, call back the person who left the room. Ask him to stand in the middle and try to figure out who the leader is.

• Sit in a circle. Choose a music conductor. Everyone create a sound and rhythm using hands, feet, voice, etc. in time to the conductor’s leading.

• Without the participant’s knowledge, stage a sudden “happening”. Then have everyone describe exactly what happened in writing, giving as many details as possible. Compare the descriptions. Are they the same? Why not?

Have children work in 2 or 3 person teams. Ask each team to pick an ‘A’ and a ‘B’. ‘A’s’ are the artists…and ‘B’s’ are the blobs. The artist (s) forms his/her partner into some kind of statue. The blob relaxes as much as possible until the statue is formed, then tries to hold that pose. (TIP: PLAY MUSIC while artists are forming blobs.) When art works are complete have artists walk about and admire each other’s creations!

• The Pretzel: Form a long chain holding hands. Designate a leader who goes in, around and under, taking everyone with him until a human knot is formed. Then, the leader retraces his steps and unties the knot.

• Object Creation: One person begins a mechanical movement. Another person attaches himself to it adding movement. Continue to add youth to the machine, using sounds and moving through space.

• One person goes to the front and begins a non-verbal activity. Others enter once they figure out what the first person is doing. Form a scene without words and let it play out.

• Use your bodies to build a house. Some people become the furniture, telephones, and tables. Others live in the house. Then huff and puff and blow the house down.

• Pair up. Look carefully at each other. One person closes his eyes while the other changes something, such as untying a shoelace. His partner opens his eyes and tries to identify the change. Reverse.

A good resource for Drama games: 101 Drama games for children: Fun and Learning with Acting and Make-believe. By Paul Rooyackers and illustrated by Cecilia Bowman. A Hunter House Smart Fun Book.  Purchase at Amazon.com

1.)  The Different Types of Drama

If you’re interested check out our Costumes or Make Up Ideas.