With lots of inside time on the horizon, you’re on the hunt constantly, searching for fun games for kids. That’s where minute to win it games come in. Even if you never watched the television show, you can still use these kooky, completely creative and fabulously fun games during your next rainy weekend afternoon or recess break from homeschool. Scroll down to see them all. 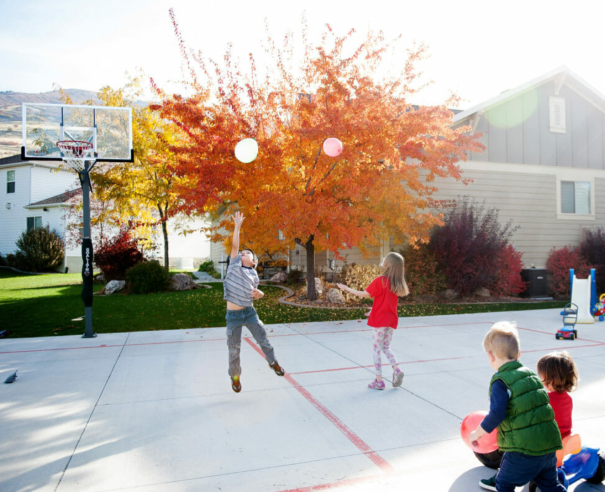 1. Defying Gravity
Up and away! Using one hand, kids keep their balloon in the air for one minute. If this is too easy, for the half-pints you can add two balloons (or more!). Remember, no resting a balloon on a body part.

2. Wrap It Up
A two-player game that involves wrapping one player up with streamers, ribbon or toilet paper.

3. Ball Drop
Have your player stand on a chair. Set a plastic cup on the ground in front of them and give them three ping pong balls. The object is to get all three balls in the cup without missing or having any bounce out. 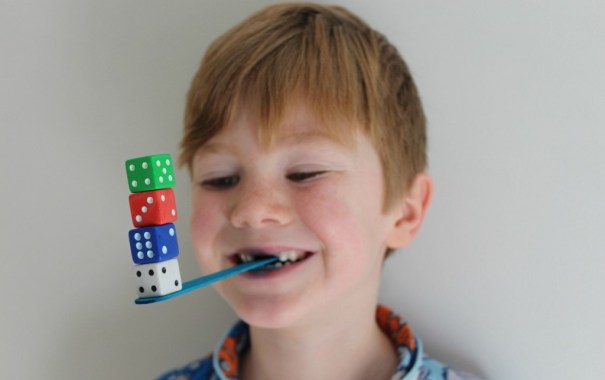 4. Dice Balance
The kids over at Paging Fun Mums try to see how many dice they can get on the stick in one minute (the most dice wins!). It’s a little tricky and super fun to watch!

5. Sticky Situation
This popular game requires players to bounce a ping pong ball just right, in order to land it on a piece of bread slathered in peanut butter. See the full instructions here. 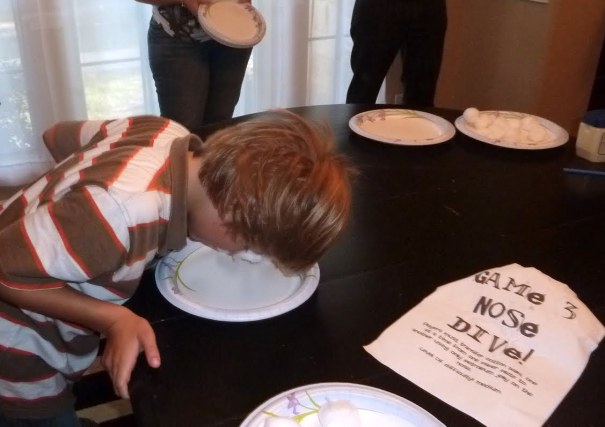 6. Sock the Block
Build several LEGO block towers and place them around the room. Players must use balled-up socks to knock over all five towers.

7. Nose Dive
The secret weapon in this game? Petroleum jelly dabbed on the nose. Using their noses (no hands allowed), players must move five cotton balls from one bowl to another, before the minute is up.

8. Cookie Face
This is by far one of the favorites of kids just about everywhere. Not only do they get to play a super-silly game, but it’s all done with cookies. Cookies! Place a regular ol’ sandwich cookie on the child’s forehead. They’ll need to use their facial muscles to move it down their face and into their mouth—without using their hands. 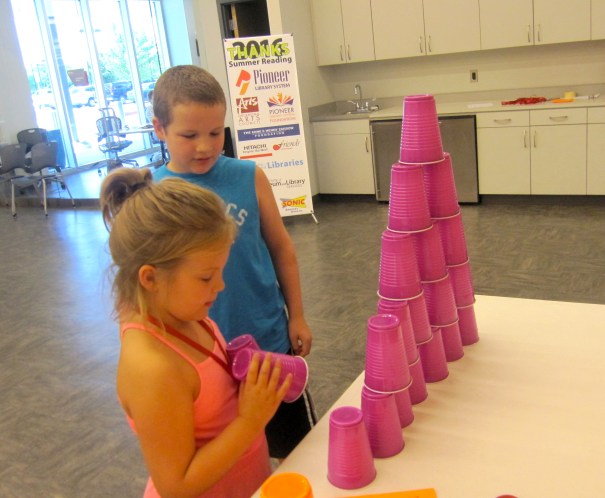 9. Stack Attack
This one might not be as tasty as cookie face, but it’s still pretty popular. Give the kids one single stack of 36 plastic cups. Each child gets one minute to stack all of the cups into a pyramid and then unstack them, making a single column again.

10. Johnny Applestack
How about them apples? Another fun stacking game for kids using fruit from the kitchen—apples. Little ones have one minute to stack five apples (or three for younger kids) on top of each other and stay for three seconds. 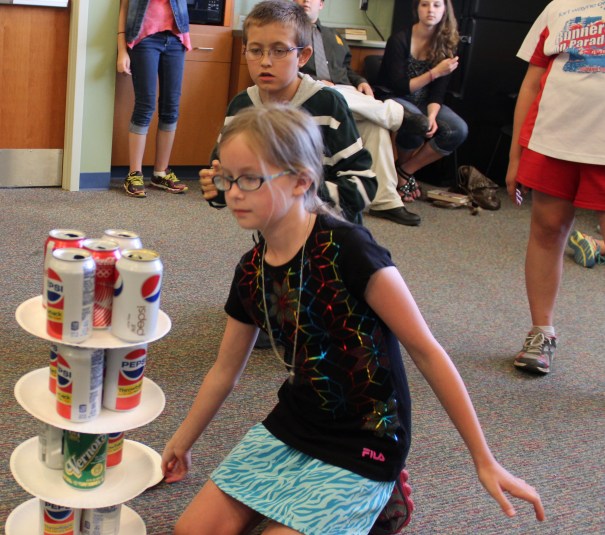 11. Chandelier
Light up the fun! You’ll need 15 empty soda cans and four paper plates. Kids have one minute to stack cans with paper plates in between to see how high they can go.

12. This Blows
If you’re looking for a minute to win it game that your tween or teen will still get a kick out of, this is the one. Each player has one minute to blow up a balloon and then use the air that’s inside of it to knock over as many plastic cups as they can. If they still have time on the clock they can repeat the steps to blow down any leftover cups. 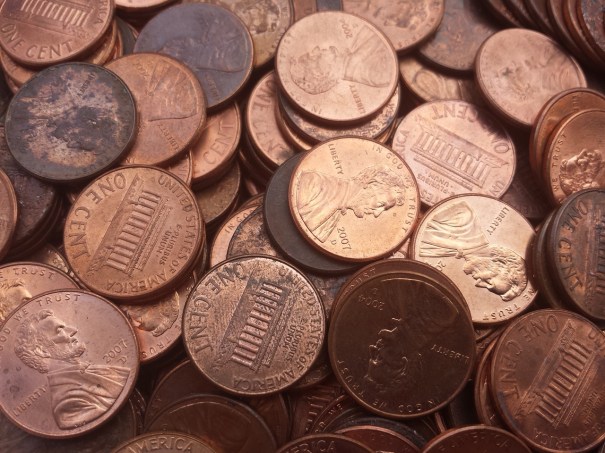 13. Penny Tower
How many pennies can your child stack in one minute? If they just guessed a million, they’re not exactly right. The trick to this game is that the child can only use one hand. And believe us, that makes it oh-so-challenging.

14. Nut Stacker
It’s almost like the penny game, just slightly more difficult. Instead of stacking coins with one hand, each child has one minute to stack hex nuts onto a wooden stick or dowel. 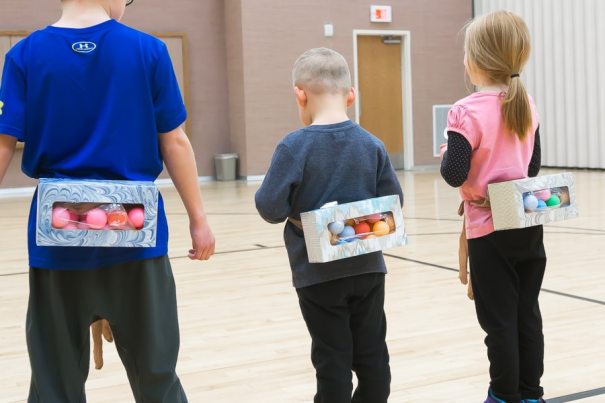 15. Junk in the Trunk
Each player will need a tissue box, pantyhose and ten ping pong balls. Put the ping pong balls in each tissue box. Then, tie the boxes around each player. Kids have one minute to shake out (no hands) as many balls as they can.

16. Doughnut Chew
A piece of cake! Of all the minute to win it games, kids will eat this one up. First, tie a string around a doughnut, then hang it between two chairs. Littles need to eat the doughnut within a minute without it falling to the floor. 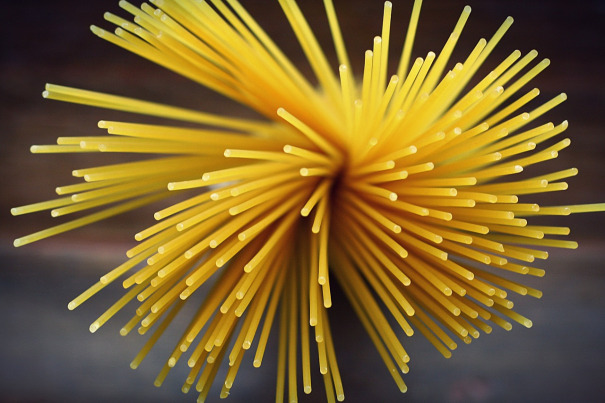 17. Noodling Around
Start this minute to win it game with one strand of uncooked spaghetti. The player puts the end of the dry noodle in their mouth. She then has 60 seconds to pick up six uncooked pieces of penne pasta—with the spaghetti. Oh, and without using her hands!

18. Scoop It Up
Move six ping pong balls from one bowl to another, using only a spoon. Again, like some of the other minute to win it games, the kids can’t use their hands. Instead, each child will use a spoon—in their mouth. 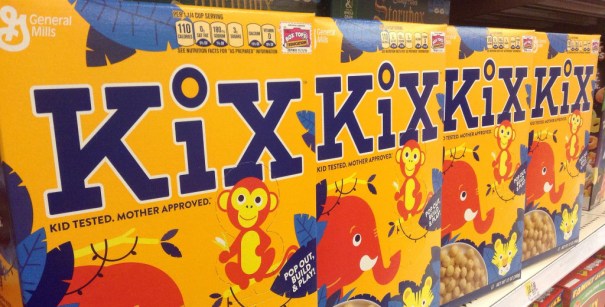 19. Cereal Scramble
Cut the front of a cereal box into equal pieces. Stack the pieces into a flat tower and set a timer for one minute. Each child has their own minute to piece the cereal box together.

20. Movin’ On Up
Stack up 25 plastic cups of one color and put in one cup of a different color at the bottom. Half-pints move the top cup to the bottom and see how far they can move the single-colored cup to the top in one minute.

21. Spin Doctor
Give it a spin! As far as a minute to win it games go, tweens find this a ton of fun. A player spins a coin on the table. A second player stops the coin with one finger on its edge (upright!). Either player can spin the coin, and it’s a win when you stop the coin for three seconds within a minute. 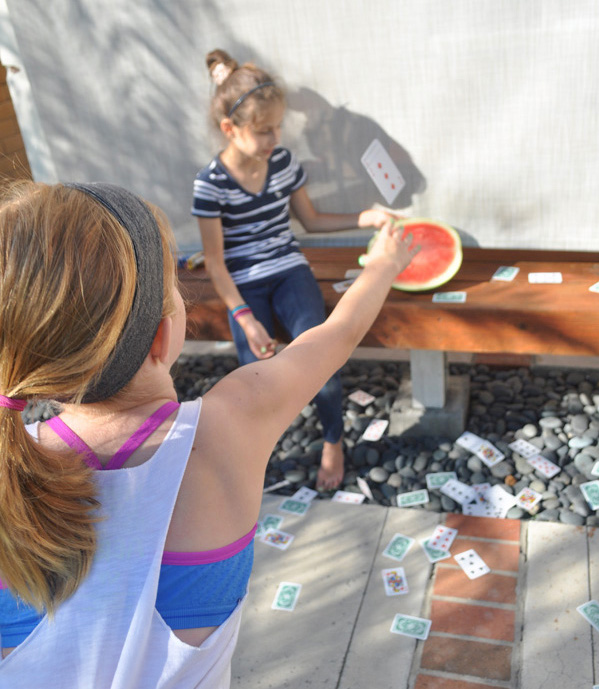 22. Card Ninja
Tweens and teens will get a giggle out of this minute to win it game. Slice a watermelon in half, securing it on a table or other flat surface. Give the kids cards to throw (kind of like throwing stars). Whoever gets the most cards into the melon in one minute wins.

23. Puddle Jumper
Set up a series of plastic cups. Fill them to the top with water and set a ping pong ball on the first in the row. The kids need to blow the ball from the first cup to the second. Keep going with more balls, racing to see who moves the most in one minute.

24. Ping Pong Toss
Players have one minute to try and toss ping pong balls in a container down the table. Three in a row wins, or, at the end of the minute, whoever has the most balls in his or her container. 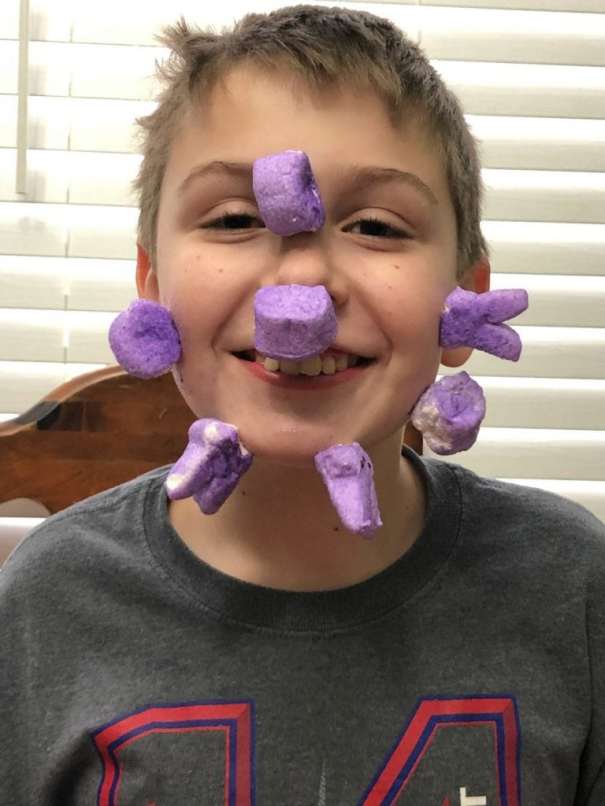 25. Peep Face Game
Got extra peeps? We love this twist on the cookie minute to win it that’s a fun game for kids at Easter. Sunflower Mom gives her little chicks one minute to stick as many peeps as they can to their face! Little bunnies think this game is funny.

26. Penny Hose
Take two of the pennies that you used for the Penny Tower game and place one at each end of a pair of pantyhose. In other words, put the pennies in the toes. The child puts one hand in each side and must get the pennies out in under one minute.

27. Leaning Tower of LEGO
Fill two bins/buckets with LEGO (the number depends on the age of the players). Players must stack all the bricks in the container. If the tower breaks, continue to stack. The first person to stack all their bricks wins! 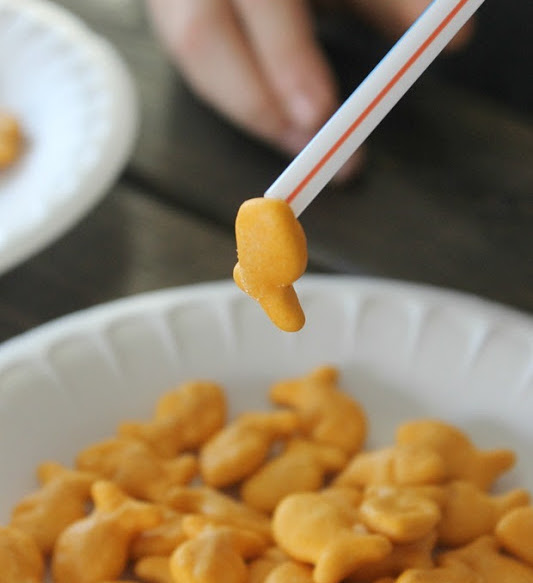 28. Go Fish!
Whether it’s crackers or mini marshmallows, this fun game for kids is easy to do. You’ll need straws and two plates. Little gamers have one minute (to win it!) to see how many fish they can transfer from one plate to another with the suction from the straw and no hands.

29. Keep it Up
As light as a feather! Little players keep two feathers in the air for one minute (or as long as they can). The catch is they can just use their breath. To make it easier for younger kids, they can use a straw.

30. Sponge Run
Place a kiddie pool or a bucket full of water on one side of the yard, and place an empty bucket on the other side. Players must soak up as much water in their sponge as possible, and carry the sponge on top of their heads to the empty bucket. Once they arrive, players must squeeze as much water as possible into the empty bucket and head back to their teammates. The first team to fill their bucket to the line wins. 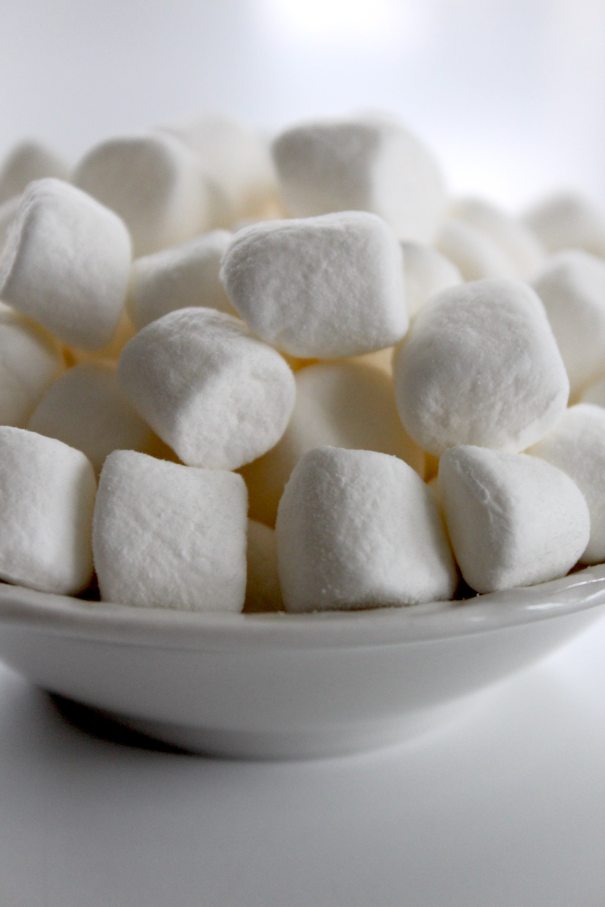 31. Hot Chocolate Marshmallow Toss
Have players stand back from the table with mugs on it. Give players a designated number of marshmallows and see how many the team can throw into the mug in one minute.

32. Penny Hose
Players have to retrieve two pennies from the bottom of a pair of pantyhose. It’s hard than it looks!

33. Rubber Band Shooting Gallery
Get some rubber bands, aluminum cans and have players stand 10 feet away. Start the clock and see how many they can knock over in a minute! 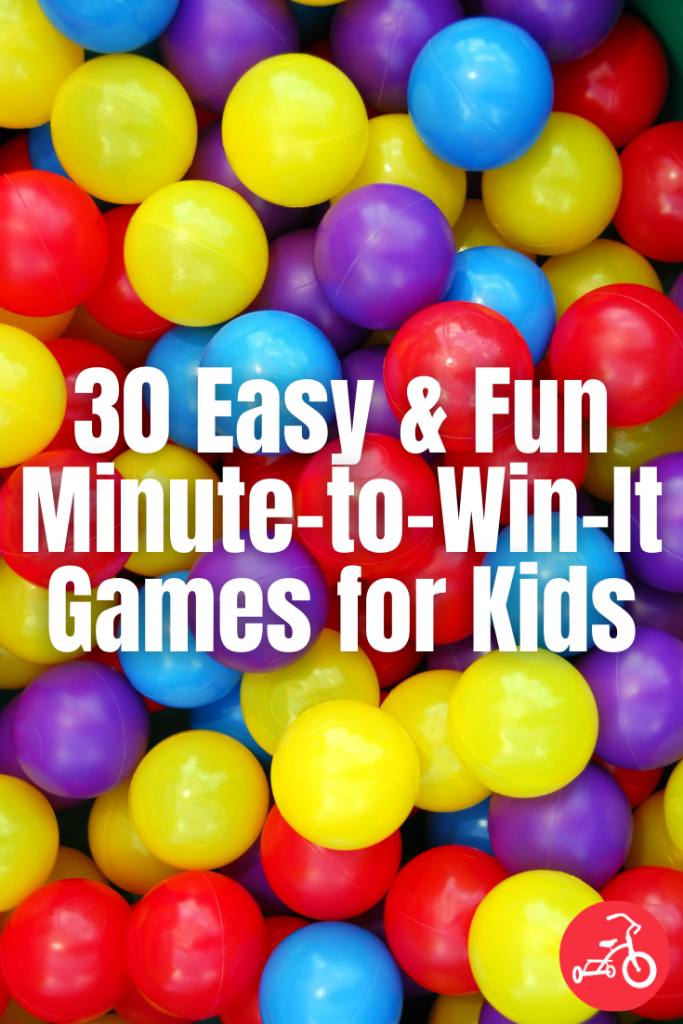